Affectionately known as the house on the rock, Clingstone is a landmark you can’t miss when you’re sailing around Narragansett Bay. Is it inhabited? Can you rent it out? We get all sorts of questions about its origins and what it’s used for these days. 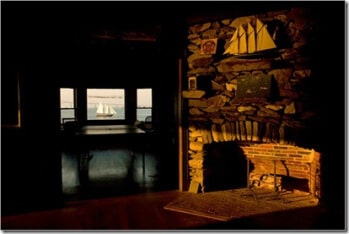 Despite the many stories floating around about Clingstone, the house itself was built in 1905 by J.S. Lovering Wharton, son of the famous industrialist Joseph Wharton. The Whartons hailed from Pennsylvania and were Quakers. They preferred the island of Jamestown over Newport because the island was much quieter than Newport, which had primarily been settled by New York society. This distinction between the two islands is still apparent today if you have the opportunity to stroll down both Conanicus Avenue in Jamestown and Thames St in Newport. One is quiet and peaceful whereas the other is bumping on a summer evening!

Wharton (who built Clingstone after the government condemned his first summer house to build Fort Wetherill) summered at Clingstone until his death in 1931. For over 20 years, the fabled House on the Rock lay vacant and abandoned. It survived the great Hurricane of 1938 and large hurricanes Carol in 1954 and Diane in 1955.

In 1961, a Boston architect named Henry Wood purchased the house for the back taxes owed on the property which at the time was only $3,600. What a steal! At the time of the sale, all 65 windows on the house were smashed and vandals had fired marbles into the interior shingles. The house was missing its roof.

Over the years, Wood slowly repaired the house until it became wha 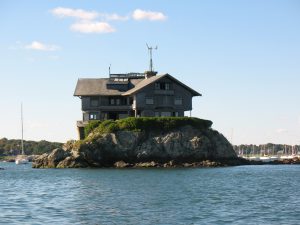 t you see of it today. In a New York Times article from 2008, it mentions that all of the black porcelain doorknobs are salvaged from houses torn down in Boston’s South End, the lights are from an old slaughterhouse in Roxbury (near Boston), and that all of the labor to restore the house was donated by friends of Henry Wood who wanted to help him out.  The legendary work weekends with an assortment of colorful characters led Wood to comment that “the place has a deep Bohemian funk.”

Yes. Henry Wood’s family still uses Clingstone for much of the summer, but if you have a spare $8,000 hanging around, you too can rent out the House on the Rock for a week. This might sound expensive, but with ten bedrooms, Clingstone offers one of the most iconic rental properties on the market.

Great question. My advice is to make friends with your benevolent captain on Schooner Aquidneck and ask politely if he can drop you off on the Sunset Sail!