Sightsailing strives to give you a fun sailing experience and show you the best of Newport.
We have been operating for more than 30 years and are the oldest, locally owned company
in Newport offering both regularly scheduled sails and private charters to the public.

“We're a merry bunch who all love what we do and are lucky enough to do it in one of the prettiest places in the world!”

Sightsailing Inc. was started by John Hirschler, who still works here almost every day.  John is a native Newporter who was lucky enough to be introduced to sailing by his parents in their Pearson Ensign and Herreshoff Bullseye. Like many local youngsters bitten by the sailing bug, he sailed summers in the Newport Yacht Club Junior Sailing Program, going on to race dinghies and 420s all over Narragansett Bay. After graduating from Boston University and a stint of office work, he decided it might be a good idea to start a business before returning to business school.

John started Sightsailing doing all the sailing himself in a 22 foot Pearson Ensign while his girlfriend ran the ‘office’…basically a phone, tattered notebook and a rickety chair. After a season or two, John added another boat, and then a few more. He received his MBA but decided that even though it was a boatload of work, he really enjoyed running his own business and "messing about in boats." John is a serious "boat-junkie" who likes nothing more than strolling through boatyards looking at boats.

In the winter, John can be found covered with muck in the boatyard, reading the Sunday New York Times, dreaming of visiting far away places and catching up on everything that got put on the back burner during the sailing season! If you have read this far and want to know more about John, scroll to the bottom of this page and watch our History video.

Favorite Quotation:"You win some, you lose some and some get rained out, but you gotta suit up for them all." J. Askenberg.

Meet The Captains and Crew

When a man shows up for his job wearing a ball cap embroidered with a bicycle that reads: "Livin' the Effin' Dream" you know you've probably met an interesting guy.

Tyson has bicycled all over the world including long-distance treks to Japan, New Zealand and just this winter, a long trek down the Baja into Mexico. Let's just say he's a serious bike-junkie.

Tyson has sailed aboard Aquidneck on and off since 2008.  As most of our captains he started out as crew and worked his way up to captain.  Referred to as "The Minister of Narragansett Bay" by one of his sailing school students, Tyson knows the history of every sight and is extremely knowledgeable about the coastline, bay, ocean, and issues affecting them.

He has sailed on boats ranging from Lasers, 420's and FJ's, to J 22's, SEA sail training vessels including the Corwith Cramer and Robert Seamans and even a stint on Dodge Morgan's solo round the world boat, American Promise.

His past work experience includes sailing instructor, fisheries observer and serving as the Sustainability and Educational  Program Director for Sailors for the Sea. In his off time, you might catch him rebuilding a bike to give to a friend, or picking plastic out of the harbor.

Eric came to us after having lived in Maui for 10 years and sailing giant catamarans for sunset and whale watching cruises of the beach in Maui.  He's also worked as a sailboat rigger.  Eric has sailed up and down the Eastern seaboard, Bahamas and Gulf of Mexico. Eric sails Sightsailer along with his sidekick Bayard.   In the offseason, he's a residential contractor,  builds houses and does the occasional yacht delivery.  Eric exudes the laid back Hawaii style but is one of the hardest working and nicest guys we know!

Captain Jeff sails Starlight for us.  When we ran an ad for a captain several years ago it turned out he lived just down the street from the office.  Jeff is a great sailor who also enjoys racing sailboats with his buddies on his days off.  Jeff has a wide variety of interests. He retired early from a career in high tech and when he not sailing he spends his time buying and fixing up properties, restoring old American muscle cars and trucks.  Jeff genuinely enjoys Aquidneck Island, Narragansett Bay and Starlight!

Paul has sailed professionally all over the world on both sail and powerboats up to 130 feet and has extensive diving and underwater living experience.  In fact, he's listed in the Smithsonian Institute in Washington D.C. as being a member of NOAA's Hydrolab and Aquarius Project- the longest running and most successful underwater laboratory program in the history of underwater living.  He holds a 1600 ton unlimited license.  Originally from England, Paul lives stateside in Newport in the Summer with his wife Margery and flies south to Boca Raton for the winter.  Paul is a fill-in/backup captain on Starlight and thoroughly enjoys meeting guests from all over the world and showing them Newport!

Matt captains Aquidneck for us. Originally from Colorado, Matt has called Newport home for close to 10 years.  Matt is a very accomplished seaman with extensive experience operating traditional vessels.  He has sailed schooners and various tall ships  in the Pacific Northwest, West coast, Maine and Key West.  Matt is a graduate of the Northwest School of Wooden Boatbuilding, enjoys woodworking, small craft restoration and is extremely handy doing repairs and maintenance on our fleet in the offseason.  In his spare time Matt enjoys woodworking, dancing and good conversation.  When he's not working, you may find him out sailing small craft, hiking or socializing with friends.

Sophie captains our O'Day 34 Starlight which sails exclusively by private charter.  Sophie has captained boats ranging from motor yachts to America's Cup 12 meters. She is  an accomplished sailor, and an adventure seeker who has sailed up and down the Eastern seaboard and in the Caribbean.  Sophie is an expert at putting her guests at ease and tailoring her sails to exactly what her guests are looking for. With a degree in biochemistry, Sophie is as smart as they come and can talk about anything! When she's not sailing here, you'll find her hiking, camping or climbing!

Joel hails from South Africa but now makes Rhode Island his home.  If he had a dollar from everyone who thought his accent was Australian, British or New Zealand he'd be a millionaire ten times over.  Joel crews on Aquidneck and never tires of sailing, slinging stories and suds and showing guests a nice time. When he's not working you may catch him surfing or visiting his wife in New York while she performs with the Rockettes! 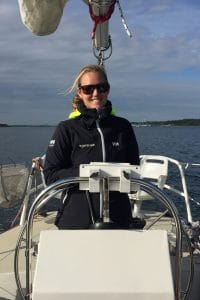 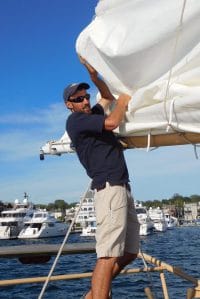 This section would not be complete if we did not pay homage to the people who really do the heavy lifting around here: the crew and the front desk team. The front desk team is the one who answered your phone call, explained our different boats, booked your reservation and greeted you upon check-in. They also wear many different hats, sweat all the details, tackle a multitude of office tasks and are the glue that holds this place together!

The crew aboard Aquidneck and Sightsailer are also phenomenal. Every season we get a boatload of applications from all sorts of people: college sailing team skippers, merchant mariners, teachers, boat nuts, you name it. We try to hire people who not only know how to sail, but really like working with people. Our crews are the ones greeting you, raising, lowering and trimming sails, pointing out sights, ensuring your comfort and sharing their knowledge of Newport with you. They have the largest impact on your experience and always try to do an outstanding job!

Courtney, also known as 'Special K" for her MacGyver-like skill set, ability to figure out the impossible and accomplish the toughest tasks, tackles all sorts of special projects. With a degree from Boston College, experience with small business startups and gas volume analysis in the energy industry, Courtney has a wide and diverse skill set. No task stumps her. She's curious and loves a challenge. When she's not juggling an incredible number of odd-shaped balls, you'll find her running (and winning) triathlons, putting her posse of clients through high-intensity exercise routines, skiing, surfing, making unbelievably good and creative food, or relaxing with friends while enjoying a Mudslide on Block Island.

Isabella, better known simply as Bella, is our dock manager and runs our sales and reservations front desk as well as a host of administrative and marketing tasks. She helps keep everyone in line and is the glue, along with chewing gum and duct tape, that helps hold this place together. Bella grew up a military brat and has lived all over the world including Naples Italy, Kings Bay Georgia and luckily for us, Rhode Island! When she interviewed with us, we didn't hesitate to bring her aboard. She wasn't walking out the door without an offer. Unflappable and graceful under pressure, Bella knows all the ins and outs of running the front desk. She's the one who may have booked your charter, greeted you at the dock or provided helpful information. Smart as a whip and multi-talented, Bella helps run our Instagram and Facebook accounts and helps out with a myriad of back-office tasks. When she's not working, you'll find her walking her Boxer Diamond, relaxing at the beach, eating oysters or sipping an Espresso Martini.

Gwen is a bundle of energy and a barrel of laughs. Originally from Connecticut and now a resident of Newport, Gwen is a recent graduate of Salve Regina College where she played on the school soccer team and participated in the dance club. She's extremely knowledgeable about Newport and the surrounding area as well as all of our boats and sails. Gwen is bright, very caring and compassionate and a lot of fun to work around. She is a public school teacher in Newport during the offseason.

Tessa is smart as a whip. A graduate of Boston College with a degree in English, Tessa is extraordinarily well-read and curious about her surroundings. She is almost always in the middle of a book and has a list of "must-reads" in her library. Mild-mannered, observant, reserved and professional, Tessa has a wild-child side to her that few see. She is adventurous and loves to travel be it foraging for rare and exotic mushrooms, or antiquing at estate sales. Now in her second season at the front desk, Tessa knows all our policies and processes like the back of her hand and she's extremely helpful to all of our guests and staff.