A sail through Newport Harbor is filled with rich history and views of a lifetime. We wanted to give you a little more info about one special attraction you’ll see on your public sail or private charter with us: Rose Island and its centuries old lighthouse.

The 18-acre island, on the National Register of Historic Places, got its moniker because some say it looks like a rose at low tide. It features a working lighthouse, wildlife refuge, and the Fort Hamilton Barracks, a remnant of the days when the island served in the defense of Narragansett Bay and Newport Harbor. Situated about a half-mile from Goat Island, Rose Island is accessible only by boat. 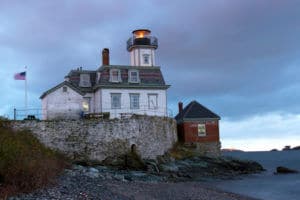 Rose Island is known widely for its lighthouse, a visual icon in the bay resting near the path of the Newport Pell Bridge. First lit in 1870, the Rose Island Lighthouse served as a beacon through the harbor for growing shipping traffic. It is open to the public for tours from Memorial Day through Labor Day, or by special arrangement in the off season. The lighthouse was discontinued when the bridge was completed, and after years of falling prey to vandals and storms, it had seen better days. In 1984, the volunteer-helmed Rose Island Lighthouse Foundation initiated restoration to its 1912 condition and renovation with solar panels and other environmentally sensitive utilities. The lighthouse was lit again in 1993, and continues to be one of only a handful of remaining lighthouses run solely by volunteers.

As a wildlife refuge, Rose Island is a prime place for birdwatching. And in the winter, you can often catch a glimpse of harbor seals on the eastern shore.

If you’ve got a day to explore, Rose Island offers much in the way of beauty and history.  The Jamestown Newport Ferry offers daily ferry service to the island in season, or you can beach or anchor your own boat, or even kayak out if you’re feeling adventurous. A $5 landing fee covers self-guided tours of the lighthouse museum and the island, but note that walking the perimeter of the island is not allowed during bird nesting season from March through mid-August. There are still a few acres of land around the lighthouse, and around the barracks, to stroll. It’s also a great spot to beachcomb, tidepool, picnic, watch boats, and of course take in stunning views of the harbor and Newport Pell Bridge.

Looking for more than a daytrip? Guests can even rent one of six rooms in the lighthouse or be a volunteer keeper. This option may even grant you what one Google reviewer cited as “sunsets of a lifetime.”

We love the history of Newport, RI and welcome you to see Rose Island, along with many other amazing places, up close on a public sail or private charter of Newport Harbor. Our captains know a thing or two about the sights you’ll see aboard one of our vessels — just ask!